Other than cycling my other main pastime is astronomy, in particularly astrophotography.  It is a very difficult hobby in itself but, like cycling, also depends on good weather.  More than cycling it requires not just good weather but clear skies and, preferably, the absence of the Moon, as it’s overpowering brightness bleaches out the rest of the night sky.  Such has been the weather here recently that I’ve been unable to undertake any serious astrophotography since 17th November 2018!  Ironically last week we got clear skies from dusk to early next morning and it was a full moon – as mentioned usually a bad combination but on this occasion, it was perfect for what was going to happen.

Thanks to the work and ideas over the preceding millennia of great thinkers and scientists including Pythagoras, Kepler, Copernicus and Newton et al we can predict with great precision the movement of objects about the heavens.  With such science we can now send rockets through space on journeys  lasting years, sometimes orbiting the Solar system two or three times and covering billions of miles, to eventually intersect an asteroid or deep space object travelling at over 70,000 mph – and then return images back to Earth.

Combining such science and mathematics with centuries of observations of the aforesaid space through which we on Earth travel – the Solar System, Milky Way & Universe – we can now predict with great accuracy where and when known objects will be at any time in the future, or have been in the past.  In this relatively new era of computers such information can be coded into planetarium models that can be obtained for free or a small cost and operated on a home computer or even a smartphone.  I use a number of such programmes such as Cartes du Ciel or Stellarium to plan my astronomy, from which I can create or re-create the night sky anywhere at anytime on Earth.

Even without such computational power mankind has for some while been able to calculate where Earth, the Sun and Moon will be at any time and, moreover, when these bodies might intersect and block the light from the Sun to cause an eclipse.  I’ve only seen a solar eclipse once in 1999 in North France – like so much of nature it is an incredible spectacle that will stay with me for ever. 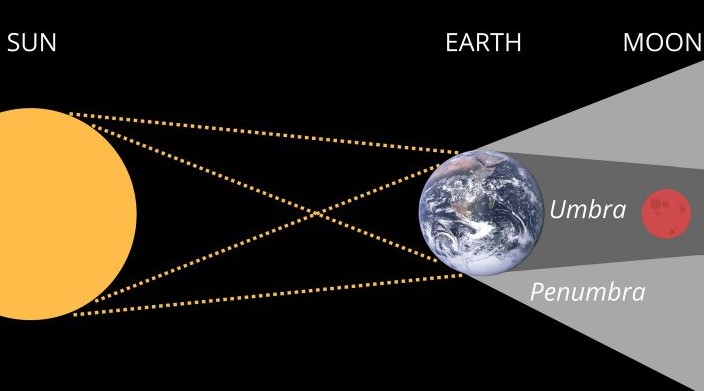 A similar occasion occurred last Monday morning 21st January between about 3.00 a.m. and 6.00 a.m., when the Earth moved across the path of the Sun’s light and the Moon to cause a lunar eclipse (see above diagram).  To my great surprise and relief, with a clear sky up until just after so-called totality (see below) finished, I was able to view and image this spectacle of the heavens.  Using a tripod mounted Canon L-Series 300mm lens and 700D, I obtained a sequence of images recording the lunar eclipse in all its glory (see top of the page).   As wonderful as these images are they can only capture something of the spectacle.  Seen with the naked eye the whole event takes on another, altogether more profound meaning and feeling, as the giant red balloon-like Moon seems to float in space just in front of you.

I’m still waiting for a clear, moonless night to return to more conventional astrophotography but for now I’m thankful that 21st January turned out so well.  The bad news is that the next lunar eclipse in the UK will not be until 2029 – wonder if the sky will be clear then?

For a more detailed account of the lunar eclipse see my other website Watch This Space (Man).

View all posts by grahamrob

Comments are always welcome at the bottom of each blog but feel free to contact me directly via: graham.s.roberts@gmail.com