As mankind around the globe is inexorably drawn into urban life, the search for how to sustainably move about town seems elusive.  It is becoming increasingly obvious that we cannot continue to use private petrol or diesel vehicles as the rising pollution created is incompatible with health and well-being, as well as the environment.  Moreover, there’s insufficient room in town for few private vehicles, even those with electric power, as gridlock has become a common feature wherever you live + lack of parking etc.  You don’t have to belong to Extinction Rebellion to conclude that we cannot go on like this.  However, following last year’s tour of the Dolomites in Italy, I am convinced there is a solution within our grasp: it does not require new technology or vast quantities of, as yet, unknown technology and undeveloped minerals, let alone extensive related infrastructure that realistically would take decades to develop. So what is it?

As usual my cycling from November to April tends to be restricted to local circular rides of up to +30 miles from home – mostly because of cold, poor weather and winter road conditions.  With the arrival of spring this starts to gradually improve – less rain, more daylight and warmer temperatures, with a corresponding desire to cycle further afield.  This usually means extending circular routes into areas just a bit further away and after years of the same rides there’s a growing urge to find new territory, which might lead to driving with bikes to a new area or touring, if you’ve got the time.

However, access to new areas and rides further afield can also be achieved with the use of public transport, notably trains.  It’s disappointing that since the privatization of the UK railways, taking bikes on trains can sometimes be difficult and even impossible: bike restrictions, lack of dedicated bike space, too crowded, unclear or unworkable booking conditions etc.  Fortunately with some patience, homework and travelling out of commuter hours, it is often possible to use trains to reach, return from or just amend local rides and thus open up infinite possibilities – I do it all the time.

Therefore, with the sun shining and the wind blowing from the east, my inclination recently was to head further afield for a ride to the east, thereby returning home with the help of Mother Nature from behind.  In order to expand my route I chose to take the bike by train to Tonbridge early in the morning from Redhill, which is an attractive 30-minute journey in itself across the lower slopes of the Greensand Ridge; I would subsequently cross the same railway line a number of times later by bike on my way home (see photo at the top of the page).  I’m pleased to say that Southern trains do have spaces in a few carriages specifically for bikes, which can also be secured to the wall with extending straps, no need to book but preferably travel outside busy times to ensure a space – I was the only bike and almost the only passenger!

I often cycle east to Haxted, Edenbridge and beyond to Hever and Bough Beech reservoir, thus making something of a 40 to 50 mile ride and sometimes onwards to Tonbridge via Leigh, returning home by train.  This time using my converted e-bike, I decided to tackle some of the more hilly terrain south of Tonbridge along the Wealden hills, before joining a regular route near Hever and then via Edenbridge on to Staffhurst Woods and Blindley Heath back home.

The initial 11-mile Wealden section through Penshurst, Chiddingstone Heath and Markbeech was probably one of the most attractive routes I’ve taken in nearly 30-years of cycling in the region near my home.  At first, looking back from the climb up onto the Weald is a spectacular vista across the upper Medway river valley and over towards the wooded Greensand Ridge in the distance (see image above).  Once on top the road wanders up-and-down along the Weald through woodland, which occasionally opens onto hidden valleys, from time-to-time passing through beautiful old Wealden villages, most noticeable of which is Penshurst.  Located at the confluence of the Medway and Eden rivers, the village is best known for Henry VIII’s residence at Penshurst Place.  After Penshurst the scenery and road surface was also excellent and not surprisingly attracted lots of other cyclists.

After about 11-miles the ride turns northwards and drops down from the Weald to Hever, once home to Anne Boleyn then Anne of Cleves in the 15th / 16 centuries, through Edenbridge and then joins a favourite route to Staffhurst Woods, on to Gibbs Brook Lane, Blindley Heath and home via Smallfield.  Though a very familiar ride, this time the section through Staffhurst Woods and Gibbs Brook Lane was in reverse to usual, thus producing a different perspective and feel.  All-in-all this new ride was one of the best I’ve undertaken locally, all of which was made possible by taking the train to a more distant start than usual and thereby introducing a new area to my cycling repertoire.

As a facilitator of cycle rides and tours the train is a peerless and I’ve used them on many other occasions:

It was last year’s tour of the Dolomites in Italy that demonstrated to me the future for transportation in-and-around towns and cities, which was exemplified at the starting point in the town of Bolzano but continued throughout the ride all week in other towns and cities.  Everywhere large numbers of people, old and young, were getting about town on bikes (50% normal pedal bikes + 50% e-bikes) sharing pedestrian areas or using bike exclusive areas or dedicated paved cycle tracks all over town and into the surrounding suburbs and villages.  In addition, the public transport, in the form of good rail and bus services and even cable cars up to the adjacent alpine villages, were used extensively by people just going about their business.  The result was that the traffic was light and most people got where they wanted to either under their own steam, walking and cycling or by public transport.  The difference compared with places such as the UK was that there was a will, politically and by society, to make it work, and it did, very well. 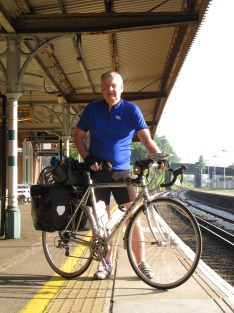 So there it is, a solution to metropolitan transportation and getting about in general:

This might not seem revolutionary and in a way it isn’t, until you (a) scale it up to the required level, and (b) significantly reduce all other non-essential forms of vehicle transport – electric vehicles are not the answer, except for essential and public transport, as they still take up too much road space and at the moment are largely impractical.  Looking at the state of getting about today in places like London, this is a practical way forwards and it works, I’ve seen it working but do you and I and the politicians have the will to do it?

View all posts by grahamrob

Comments are always welcome at the bottom of each blog but feel free to contact me directly via: graham.s.roberts@gmail.com